When you visit Kumano Hongu Taisha,Torii(the entrance gate) first catches your eye.
It marks the border of the sacred place where gods dwell and the secular one.
Passing through the gate,you will see a flight of 158 stone steps to the Shaden(the shrine buildings).
On the way there is the Temizuya to cleanse your mouth and hands before worshipping gods. After you finish going up the stone steps,on the right you will see the Jyuhosho where you can get amulets or talismans on which is written the name of the enshrined deity. On the left there is the Shamusho,shrine office.Opposite the building,there is the Hiden where kannushi(a Shinto priest)prays to gods on behalf of worshippers.On both sides in front of the building are placed a pair of Komainu,stone statues like lions to purge evil spirits from the sanctuary.
Passing through the Shinmon leads you to the Honden,center of the shrine.
You can worship gods at a small gate in front of the building.
The way you worship gods in formal manners is as follows:first you make a money offering into an offertory box,and then bow twice,clap your hands twice,and finally bow once again.This manner shows your heartily worship of gods.

It is said that gods dwell in woodlands in Japan.
Wakayama Prefecture covered with beautiful mountains is located in the southeast of the Kii Peninsula,the approximate center of Japan’s main island of Honshu.
The Kiwahatenashi mountain range runs through the southern part of the peninsula, featuring the 3,600 ridges of Kumano mountains.
Through the valleys from the mountains many rivers including the Kumano River, the Otonashi River,and the Iwata River flow on into the Pacific Ocean.
Kumano Hongu Taisha was enshrined at Oyunohara on a sandbank at the confluence of these three rivers in ancient times.

From the Nara period to the early Heian period, the Kumano area has been a holy place of three religions:Shinto,esoteric Buddhism introduced from China or Korea into Japan and Shugendo(the religion in which supernatural power was believed to be received through ascetic practices in mountains) .Consequently,gods of Kumano originated in nature worship came to mix with Buddhas of Buddism.In the late Heian period ,as the result of the mixture became firm,Ketsumimiko-no-Okami was identified with the Buddha Amida(Skt:Amitabuha),and both of them were believed to promise to save people in this life as well as the future life.
As a result of the whole nobility including the abdicated emperors and their vassals from the capital of Kyoto worshipped Kumano Sanzan or the three grand shrines of Kumano:Kumano Hongu Taisha,Kumano Nachi Taisha enshrined in the present Nachi-Katsu’ura-cho and Kumano Hayatama Taisha enshrined in the present Shingu-shi. To visit these shrines pilgrims used the Kumano ancient roads, which are lined with 99Oji (small shrines), travelling 300km from Kyoto to Kumano.

In the Kamakura period,people of various strata including samurai visited and worshipped vigorously these three main shrines from the whole country.The lines of pilgrims were known as”ari-no-kumano-mode”(literally,’the lines of ants making their way to Kumano’).”
More than 3,800 present Kumano Shrines all over the country were founded by Kumano-oshi(the missionaries of Kumano faith),Kumano-sendatsu(the propagating male priests)and Kumano-bikuni(the propagating female ones)in those days.

Ippen(1239-1289),founder of the Jishu Sect of Kamakura-Busshism was spiritually awakend,receiving the oracle from the gods of Kumano that he should preach regardless of the difference of the faithful or the faithless,and the pure or the impure.

In the middle of the Edo period,the main shrines were constructed as we can see today.Unfortunately a great inundation of the Kumano River in the Meiji period washed away the most part of shrines with the result that Kami-yon-sha of the main shrines were moved to be enshrined on the western hill,while the gods of Naka-yon-sha and Shimo-yon-sha have been still enshrined together at the small stone shrine in Oyunohara.There was founded the grand Torii 34meters tall,the greatest in Japan in 2003.It is carved with Yatagarasu to symbolized the eternal harmony among gods,nature and mankind.The sacred sites and pilgrimage roads in the Kii mountain range and the cultural landscape surrounding them entered for UNESCO Cultual Heritage Site in July,2004.

Various kinds of Matsuri(festival) are performed in every shrine throughout the year.
Important festivals called Rei-tai-sai are held on particular days every year.
One of them held at Kumano Hongu Taisha on April 13 to 15 is the spring festival
to reenact the gods’ descent and pray for a good rice harvest.

On April 13,in Yunobori-event the Shinto priests first purify themselves at a hot spring
and in Miyawatari-event they come around shrines while beating Japanese drums.

On the 15th the festival reaches its climax at Honden-festival and Togyo-festival—a Mikoshi(a portable shrine)and artificial flowers are carried by young men,Shinto priests,Shugendo monks leading ascetic lives in fields and mountains,and shrine maidens,and then a sacred dance and Otane(rice-transplantation)-event are dedicated by them,and finally Goma(wooden cards on which people write their wishes)are burnt by Shugendo monks at Oyunohara.

A three-legged crow was generally said to be an incarnation of the sun in East Asia-for example,it appeared in a Chinese tale and the wall painting of an ancient Korean tomb.Yatagarasu,messenger of the gods of Kumano is printed on the talismans given at Jyuyosho and the flag of this shrine,and its three legs are said to mean heaven,earth and mankind.It is also used as the symbol mark of Japan Association of Football.

Go’o-ho-in is a talisman against evils given at shrines and temples in every place.It is stuck on a house door or put between a bough on a rice nursery field,etc.The characteristics of a Kumano tailsman is in its letters designed in the shape of crows.It was often used as a stamp for making holy vows in the middle and modern ages. It is given at all the Kumano Shrines including the three main shrines of Kumano.

An Omamori is an amulet used for many reasons including warding off evil,for traffic safety health,etc.The word “Omamori “means protection,with Omamori meaning honorable protector.
They often describe on one side the specific area of luck or protection they are intended for and have the name of the shrine or temple they were bought at one on the other. There are many sizes and styles of Omamori,please feel free to choose the one that best fits your likes and circumstances. 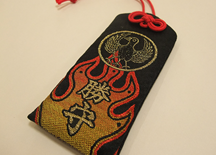